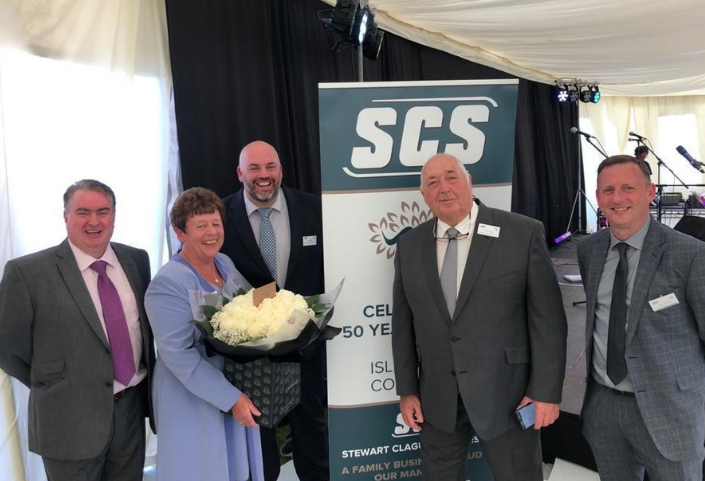 Chief Minister Howard Quayle led the speeches by quoting philosopher Ralph Waldo Emerson in reference to all of SCS’s achievements over 50 years of business: ‘It is not the length of life, but depth of life’. The Chief Minister went on to say that through the dedication and determination of the home grown company, SCS is leading the way in its eco-friendly initiatives.

Alan Clague, now the director of SCS, proudly stated that, ‘we never shy away from new technologies and next generation specifications.’ It is this attitude that has led SCS to collaborate with TT Zero race teams; as well as designing the Salmon Lake Centre in Laxey as a 100% carbon neutral building, which has been acknowledged by Mitsubishi Electric as being an excellent case study in sustainability. With the Island now being recognised as a UNESCO Biosphere, SCS have committed to working with local school children from Laxey School to plant trees at Ballannette Nature Reserve.

SCS have come a long way since being founded in 1969 by Stewart Clague and his wife Barbara. At that time, SCS was purely plumbing-focused: Stewart ran the business from his living room with Barbara helping out with the paperwork in the evenings. The work undertaken in the early 1970s by Stewart and his small group of plumbers was largely in the tourist industry, installing en-suites in guest houses and hotels. The 1980s and 1990s saw the business expand into other trades and by the 2000s, distinct departments were created allowing the business to become a one-stop solution for customers. In 2019, SCS acquired Raven Electrical Services and by integrating their teams, SCS became the largest electrical contractor on the Island.

SCS have been part of some of the Island’s most challenging construction and engineering projects in recent years, including the SES teleport on the Carnane estate; the creation of Data Centres; and refurbishment at Nobles Hospital to name a few. Confidence is growing with multiple projects especially in the tourism and hospitality industries. Two large and high-profile projects recently undertaken by SCS include the Mannin Hotel and the Comis Hotel Mount Murray.

Despite strong activity and interesting projects, the Isle of Man Construction Sector has problems recruiting experienced local tradesmen. Reacting to this problem, SCS have focussed on upskilling and training apprentices. Thanks to the financial support from the Isle of Man Department for Enterprise, along with the training opportunities from UCM, SCS currently have six young people undertaking a formal apprenticeship with one trainee, Josh Perry, being awarded runner-up Apprentice of the Year in the UK. SCS have 110 people in their workforce, with 15 staff having 15 years’ service or more with the company.

Stewart, now retired, has left the company in the capable hands of the three directors: Alan Clague, Gary Crittenden and Stephen Carter. Although retired, Stewart certainly isn’t out of action and has a busy schedule ahead of him with the three projects he has set out to achieve. The first of these is to convert Kirk Lonan All Saints Church into a community centre for the public to use for sports and performing arts.

As a lover of Laxey beach and the panoramic views it offers, Stewart’s second project is to work with the Garff commissioners and DOI to find a coastal defence solution that best protects the surrounding area from the effects of the rising sea and tides.

Last, but not least, Stewart is working with Manx Utilities on finding an appropriate solution to the sewerage works planned for Laxey village that best provides the residents with the processing plant they need. We wish Stewart all the best in his retirement endeavours and another prosperous and exciting 50+ years for Stewart Clague Services. 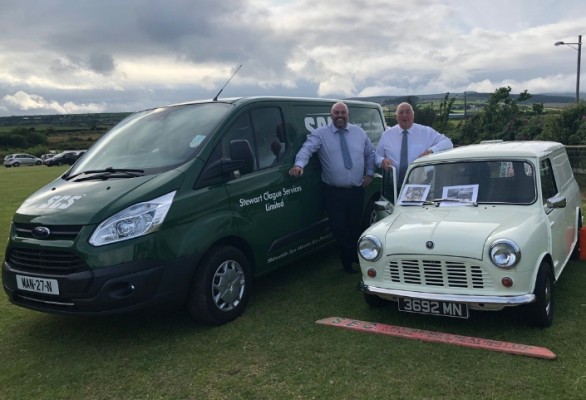 SCS’s first van alongside one of the current fleet. On the left is current Director Alan Clague, and on the right is his father and founder of SCS, Stewart Clague.