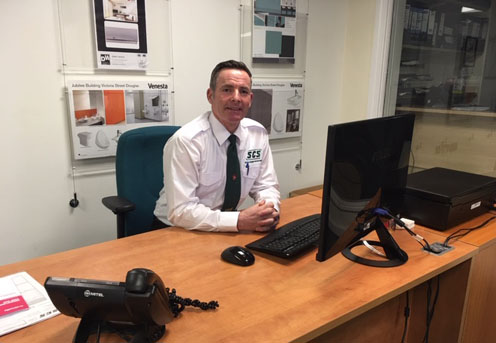 Last year on the 8th November 2018, Kieran Shields (Plumbing and Heating Foreman) began his normal working day at 7:15am at the SCS Onchan office. Being an early riser, he’s usually the first and only one there at this time and sets the work for the day. However, on this particular morning he thought it particularly unusual for several Directors to be walking through the door shortly after him. Little did he know that this day marked 30 years of his employment at SCS and the Directors had gathered to surprise him. He was rewarded with a fantastic gift for him and his wife to see one of his favourite shows in Birmingham.

Business Isle of Man went to talk to Kieran to find out a little bit more about his career in building services, and the secret to a happy 30-year long career at SCS.

Kieran, take us back to when you first started work at the company, why did you choose SCS and in what role were you working?

I first started work at the company on 8th November 1988. I actually joined SCS recovering with a broken leg from a motorcycle accident. My wife saw a vacancy for a commercial pipefitter/welder at SCS and thought it would be suitable as this was my trade.

Back then the company was based in Onchan and was predominantly just a plumbing and heating business with a small electrical side. So I applied, got an interview, and actually went to my interview on crutches. I’m surprised they employed me, but I think the fact that I was honest about my injury and just clicked on a personal level with Stewart helped sway his decision.

How has the building industry on the Island and SCS changed since you started?

Initially back in 1988 the company was considerably smaller and employed less than 20 staff. When I applied in 1988, labour was in short supply due to the huge building boom. I initially started working on the Castlemona Hotel refurbishment project, then moved onto the new Newlands Ward at Ballamona.  Shortly afterwards, I then worked on several large office block developments in Douglas.

Around 1990 the facility side of the business was introduced and it changed the whole company, opening doors to more business. At this time I don’t believe there was another company doing what SCS did; offering multiple services under one roof. This really was a huge USP as it provided a one-stop solution for customers with an already established company. On an Island where reputation is so important, our previous relationships and catalogue of work was a huge benefit to us.

In terms of the industry as a whole, technology has certainly impacted all construction and building service companies across the world, the Isle of Man included. I think the plumbing work ethic has remained the same, but advances in technology have introduced new products and systems that we have had to adapt to use. For example, renewable technology such as Air to Water heat pumps have been introduced and more companies and individuals are demanding this.

Also back when I first joined there were no mobile telephones so communication was much different. You had to go off knowledge, and find a phone box to get in touch with anyone whilst on the job. It’s so much easier nowadays, but business wouldn’t have been able to progress as much as it has without advances in technology like this. People are always demanding a faster response!

What was your background in school – Did you complete GCSE’s/A Levels/University?

I completed my O-Levels (equivalent to GCSEs nowadays) at St Ninian’s High School. There was a culture back then for kids to get out of school and get working to earn money. I started working for a company that manufactured commercial fishing equipment where I learnt to weld. This came in useful when I moved into the building services industry as I picked the role up quickly.

What was your progression through the company and what other roles have you performed?

When I first joined the company I was in the commercial side of welding and plumbing, and then moved into the domestic plumbing side and I have been there since; working my way up to become Plumbing and Heating Foreman. Once an enquiry that comes in has been approved I then go and organise the job – ‘jobbing’ they call it.

I was lucky enough to work closely with Stewart Clague (Managing Director) and benefitted from Stewart’s knowledge and experience.  He was effectively a mentor to me, and the role I am in now was the role that Stewart used to perform.

Gary Crittenden, Projects Director, who was also present at the interview, added that Kieran was recognised for his good rapport with customers, who even ask for him by name. This allowed Kieran to work his way up through the company to the position he is in now.

What work/project are you most proud of during your career?

The Southern Healthcare Development in Port Erin in 2001-2002. This was a job worth over £1m and securing this actually doubled the company’s turnover that year. I ran the installation of the plumbing service associated with the 87 bathrooms in the complex – at the time it was the biggest job we’d ever done.

What do you enjoy most about your job?

Most of all I enjoy the people I work with; both customers and staff. If I didn’t enjoy it I don’t think I’d have been here so long. I also enjoy the variety in my work as each day is so different. I come into work each day and don’t know what I’m going to be dealing with.

My motto is I’d never ask anyone to do anything that I wouldn’t do myself. I like to lead by example and I am always prepared to get hands-on. I think this is why I get on so well with my team – there is a mutual respect there.

Would you recommend a career at SCS to young children interested in construction/building services? What advice would you give them regarding this career path?

Yes of course! My son has actually just recently started working for SCS too. In fact he was the same age I was when I started my career with the company. 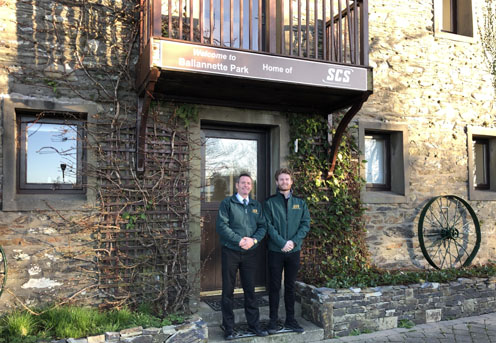 First off, I’d suggest they develop a multi-trade skill set to get some varied experience which quickly helps them recognise which area of the industry they like best. I would also say it’s best to serve an apprenticeship with a larger company where you gain experience across not only domestic plumbing but also the commercial side of the industry. For information regarding vacancies, visit our website here.

You’ve worked at the company for 30 years, but where do you see yourself going in the future?

I certainly don’t want to stop working and I would love to still be part of the company in the future. If I remain fit and well as I get older, I might consider cutting down my days, but at the moment its business as usual!

In the short space of time that I met with Kieran at a local coffee shop, it was evident just how much of a people person he is. Several people passing came over to chat to him, and it turns out they were all SCS customers. It was a delight to see and this is one of the reasons why Kieran has been so successful in his career. He builds a fantastic, trusted relationship with clients and it’s no wonder they remain loyal. Kieran is a real credit to the company and it’s great that SCS recognise this.