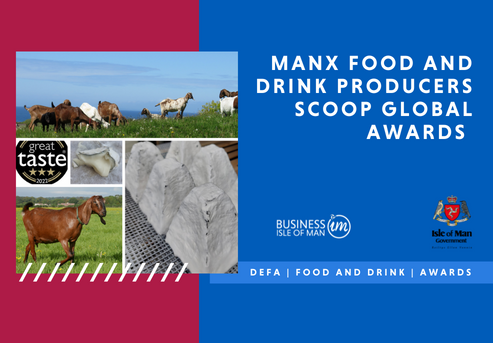 Isle of Man producers have seen a record number of culinary creations win at the world’s most coveted food and drink awards, which are based entirely on taste.

The Great Taste Awards use a network of chefs, writers and critics to blind-taste more than 14,000 products, from 110 countries, before the crème de le crème are awarded a star rating.

The Guild of Fine Food, who organise the event, said one star means ‘fantastic flavour’, two is ‘above and beyond delicious’, and three, an ‘extraordinarily tasty’ product.

The biggest Manx winner was Isle of Man Goats, from High Tilt Farm in Kirk Michael, which received the highest accolade for its Manx Ash Bloomy goat’s cheese, amongst a phenomenal seven awards.

Mike Walker from Isle of Man Goats, said: ‘This success is a major industry endorsement of the quality of our cheeses, yogurts and kefir made here on the Isle of Man.

‘We'd like to thank all of our fabulous customers, for supporting us, for helping us to refine our cheeses with their constructive feedback, and just for appreciating all our efforts.

‘We’d also like thank DEFA for supporting us as our three star cheese would not have been possible, in the timeframe, without assistance from their Food Business Grant Scheme.’

Clare Barber MHK, Minister for Environment, Food and Agriculture, said: ‘The awards are considered the ‘Oscars’ of the food world, so I am thrilled to see so many local producers recognised for the flavour of their Manx made products.

‘These awards are widely considered a global benchmark for quality and displaying the rating on their winning products will help them stand out on retail shelves the world over.’

The Government supports producers to submit their applications as part of its Food Matters Strategy.

Food lovers will have a chance to meet local producers at the Royal Manx Agricultural Show on 12 and 13 August and Isle of Man Food and Drink Festival on the 17 and 18 September.