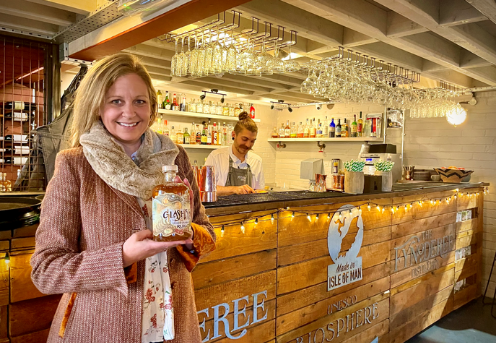 From the realms of Manx folklore in the ancient Kingdom of Mann, beneath night’s inky veil, a shifting beast bounds ashore. The GLASHTYN is here…

The newest creation from The Fynoderee Distillery, Glashtyn Spiced Manx Rum, takes its name and inspiration from ancient tales of a creature believed to haunt the shores of the Isle of Man. The Glashtyn, while under the briny wash, is said to resemble a water horse or bull, watching over a booty of shimmering pearls. But as night bleeds in, the Glashtyn cuts a new form. Emerging through the foam, a brooding figure sets foot on wet sand and shingle. Heed his call and you may find yourself dragged to the depths.

Co-founders Paul and Tiffany Kerruish explained the importance of introducing new ranges to their already impressive portfolio of gin and vodka, all featuring deep-rooted ‘Manxness’ and locally sourced botanicals:

“Sales of rum and in particular spiced rum are beginning to garner much more attention now the ‘Gin Wave’ in the UK has matured, and have seen considerable growth over the last 3 years. Alongside this growth is the major trend in consumer buying behaviour towards quality, provenance and backstory over price, resulting in an increased interest in premium spirits from artisan producers like The Fynoderee Distillery. Our focus, as with all our spirits, was to create a truly ‘Manx’ spiced rum, 100% brewed, fermented and distilled at our newly expanded Ramsey Distillery and showcasing a different element of our Island’s fascinating folklore.”

“To achieve this, we went about a long, cool fermentation of a sublime and deeply flavourful, organically farmed, unrefined cane sugar known as Panela which comes from Colombia. This resulted in a superior quality white rum that we spiced with dried fruit, ginger and cassia, peppery aniseed notes of Manx Alexander seed, and, of course, premium grade Madagascan bourbon vanilla.”

“It’s taken us over a year to experiment and achieve the standard and quality we always demand of ourselves, but we are absolutely delighted with the result. A true Manx Spiced Rum, that can be enjoyed over ice or mixed into cocktails.”

Manx-born Paul Kerruish, a multi-generational Manxman who shares his surname with the heroine of the ancient Manx fable which inspired the distillery’s distinctive name, has long believed that creating a true Manx Rum was important for the Isle of Man.

“In 1823, Sir William Hillary, living in the island’s capital Douglas, founded the RNLI. As a proud and ancient seafaring nation, where rum has long been the sailors drink of choice, I had always wanted to celebrate the fact that our small island was at the very heart of this revered institution.”

“Living in Douglas on the Isle of Man, Hillary saw the treacherous nature of the sea first-hand. He witnessed dozens of shipwrecks around the Manx coast and saved many lives with the help of locals. It was this experience that led him to Bishopsgate’s trendy London Tavern on 4 March 1824 where he gained the support required to begin his lifelong calling of saving lives at sea.”

Established in 2017, The Fynoderee Distillery enjoyed overnight success with the launch of their Fynoderee Winter Manx Dry Gin, the first of four seasonal gins which are all based on locally foraged botanicals.

This was followed by Manx Bumbee Vodka, a celebration of pure Manx honey and the Bumbee fable of a trapped fairy, continuing the important Manx provenance of the brand.

Two further Manx Dry Gins joined the range: Kerala Chai, created specifically to complement Indian and Asian cuisine, and Elder Shee, a celebration of the Island's many tangled tales of the mythical faeries who reside deep within the roots of the magical ‘Tramman’ – the Manx word for Elder Tree. Fynoderee Manx Dry Gin Elder Shee Edition was originally created as an exclusive ‘Gin of the Month’ for The Craft Gin Club, the UK's biggest subscription club for gin lovers, in June 2021.

Paul and Tiffany have had to face many challenges, but the Covid pandemic hit them at exactly the wrong time, as they explained:

“The start of 2020 saw us make our biggest investments yet. We began our move to our new Distillery which would include a bar, shop, event and tour space and new equipment to ramp up production, which would include our exciting plans for Manx whisky production. Then Covid hit and it felt like our world was caving in around us, as it must have done to so many other businesses.”

“As we were wondering the best way to get through this unprecedented period, we started hearing local requests for hand sanitiser. So, rather than mothball our plans, we switched to full on sanitiser production, which we obviously called ‘Fynitiser’! As lockdown followed lockdown we became major producers, fulfilling urgent needs for our local hospitals, healthcare practices and local businesses. It was very different to our craft spirits and, while unbelievably time intensive, it was also extremely rewarding to know we were doing our bit to keep our amazing island safe.”

“Right now though, we can start looking forward again – and what a year we have lined up for 2022! Alongside Glashtyn, our new Manx Spiced Rum, we will be laying down casks for maturing an aged Manx Rum and – perhaps the biggest news of all – the first ever true Manx Malt Whiskey.”

“Providing Covid restrictions permit, we will also be looking forward to more distillery tours next year as droves of tourists return to our enchanting shores. We  simply can’t wait!”

More information about the Fynoderee Distillery can be found at www.fynoderee.com

Beneath the cold green waters of the Irish Sea, the Glashtyn guards his treasure trove of pearls. Beware his cry on dark stormy nights, for this aquatic shapeshifter of Manx myth may lure the unwary to a watery end.