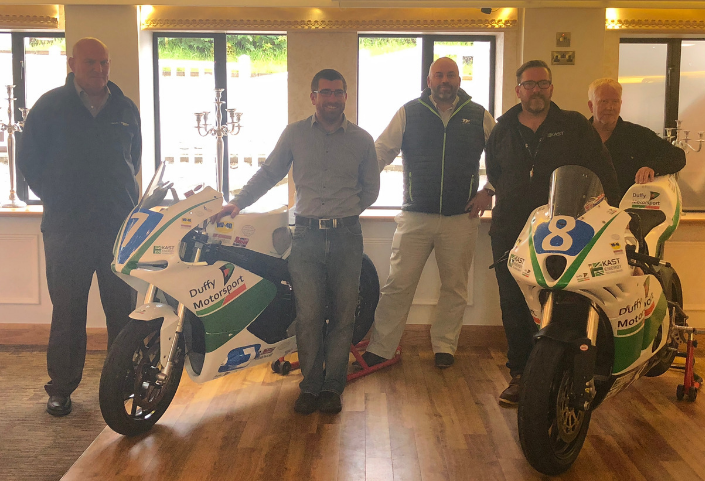 What started out as a friendly homestay developed into a partnership that neither party could have anticipated.

Kes Scott, Managing Director of KAST Energy Technologies, has been coming to the island to watch and marshal the TT for many years. When he stayed at the homestay of Alan Clague, Director of Stewart Clague Services (SCS), he never imagined it would lead to the beginning of a business alliance.

SCS are committed to the promotion of sustainable technologies and their implementation across all market sectors within which they work on the island.  KAST Energy Technologies based in Manchester are a renewable, sustainable and low-carbon technology working towards reducing energy bills: using less energy and making it more sustainable. In the last two months SCS and KAST have partnered up to develop their renewable services.

The TT Zero race has seen multiple entrants since its inaugural race in 2010. SCS have previously worked with other TT Zero teams, including Brunel University, who used the hydro power from the Salmon Lake Centre in Laxey.  The Salmon Lake Centre is almost 100% cleantech with the building being cooled and heated with hydro energy produced from the turbine generated from the nearby river. Kes launched himself at the opportunity to develop a bike of his own to enter into the TT Zero class a few years later, which was emission free from start to finish.

KAST teamed up with Duffy Motorsport, to create two bikes that are 100% emission free. Both bikes the Brammo and the Zero, which sprints from naught to 60mph in six seconds, used solarPV technology in this year’s TT Zero class. Rather than other TT Zero entrants, the bikes are completely emission-free as they do not require any plugging into the national grid, which more often than not, use fossil fuels. The bikes are charged using solar energy that is collected through the panels attached to roof of their van. The team have even gone so far as to make their work 100% renewable as the energy needed to supply their electric tools and light sources are powered by their solar powered trailer to provide a constant and guaranteed supply of energy. The roof charges the battery packs at 1kw/hour and can take up to 12 hours to fully charge the trailer, and four hours to charge the bike.

Ryan Duffy, the team manager for Duffy Motorsport, was hopeful to complete the race despite the mixed weather the island experienced over the TT fortnight. For Kes and Ryan, running the TT Zero was an effort to prove to themselves that renewably power sourced vehicles are possible and that it is possible in the world of motorsports; Possible AND successful. Ryan said, ‘This is how the TT will survive.’ To which Alan Clague added, ‘It should be part of the regulations. This is how you should be made to power your motorcycle.’

The Zero and Brammo both completed the race and came sixth and seventh respectively, with the Brammo, ridden by Shaun Anderson in his 7th TT, hitting speeds of 72.026mph and the Zero, ridden by Mike Norbury, achieving speeds of 82.289mph. Although the bikes are significantly heavier than a normal racing bike, weighing 200kg, the racers says that they enjoy the smooth drive and the challenge as they learn to adapt to a new way of racing.