An Island in a Common Sea 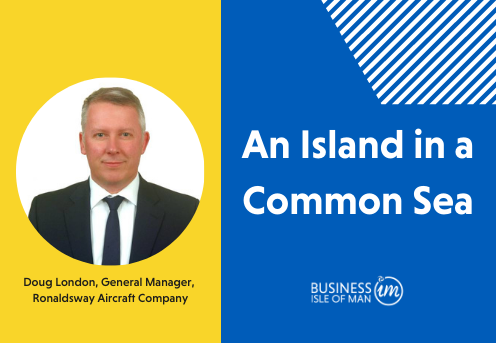 Doug Loudon, general manager at Isle of Man-based Ronaldsway Aircraft Company, reflects on a career in aerospace manufacturing and how the pandemic has presented both challenges – and opportunity, for the sector.

I joined Rolls-Royce as an apprentice in 1982, my time there spanning nearly three decades. After Rolls-Royce I joined the team at MB Aerospace for several years – I even had a brief stint in the rail industry, but my passion for manufacturing and aerospace pulled me back to MB, where I took up a position in Taiwan – an incredible experience in itself.

Following the outbreak of the Covid-19 pandemic, I decided to make the move back to the UK, and found myself turning a new chapter entirely after accepting a position in the Isle of Man as general manager at Ronaldsway Aircraft Company (RAC). I found myself in a privileged position – surrounded by a set of talented individuals, 100% committed to what they do.

In a career spanning almost 40 years, I’ve never seen something impact our industry quite like Covid-19. This is particularly true for manufacturers providing aircraft and aero engine components and services. Major OEMs took significant action to protect cash as build schedules moved to the right, and this inevitably flowed through to lower tiers in the supply chain.

Here in the Isle of Man it has been similar and businesses have been impacted in a variety of different ways. Equally though, we have benefited from significant Government support throughout, and this continues today. Many businesses - not just aerospace manufacturing - would have found surviving the pandemic’s effects much tougher, were it not for this financial lifeline.

In contrast to other Government schemes, such as the UK’s furlough scheme, the support here was aimed at keeping people at work rather than supporting them being at home and not working. This has been a positive aspect as it allowed us to train and enact improvements throughout the quieter times.

Starting a new role in an aerospace manufacturing business during a global pandemic, certainly presented me with many challenges - a number of which remain. However, positivity is key, and I can say with confidence that I now see signs of recovery with major OEMs, such as Airbus, who are forecasting a return to growth from 2022. Progress will return and bring with it many new challenges, especially in securing and retaining the skilled staff and continued investment.

Some of these challenges are global, albeit locally the Isle of Man is taking action to address many. Engineering is one such skill that remains in demand. On the Island we have a number of actions in place to ensure a new generation of engineers. The local Awareness of Careers in Engineering (ACE) Programme is a project that works with local schools to promote engineering as a career. There is also a STEM Programme with a similar aim. These have and are further supported with investment in the Advanced Manufacturing Training Centre, cluster support to businesses and professional mentoring programmes. Government grants are also available to support businesses make capital investment.

Beyond work and the office there are many positive aspects to life on the Isle of Man. It’s a very safe place with extremely low crime levels. There is good schooling, tremendous opportunity to take part in outdoor pursuits and commute times are very short. If these are too arduous, then taking in the breath-taking and varied scenery and enjoying the many pubs and restaurants, will provide anyone with an enjoyable alternative.

I firmly believe that the future for aerospace manufacturing certainly looks brighter than it did, even only a few short months ago. Growth will provide significant opportunity for wealth creation, careers and personal development. The pre-pandemic challenge of securing skills is already showing signs of return hence the investment being made in developing these skills locally on the Isle of Man. Attracting these skills will be critical to future success and as such, we are working to broaden our appeal to engage more people from backgrounds that may previously not have considered engineering and manufacturing as an opportunity.