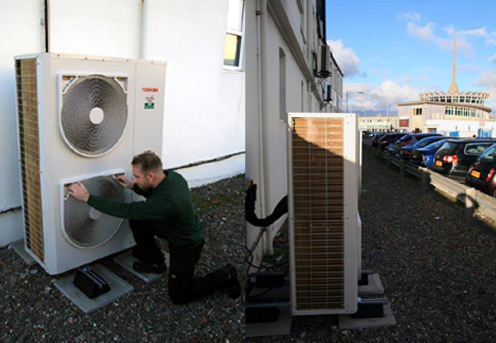 Stewart Clague Services (SCS) have recently installed one of the first next generation commercial air to water heat pump in a new Government building. The Department for Infrastructure recently acquired the Imperial Building near the sea terminal which is now home Manx Industrial Relations Service (MIRS). Part of the renovation involved installing this new clean technology, which is now used to heat the building in place of a conventional boiler central heating system.

Next year will mark 50 years that SCS has been operating, and the company continually evolves and embraces new technologies to meet both consumer requirements and future trends.

How does the air to water heat pump work?

The pump sucks in air over the refrigeration heat exchange coil, and from this, heat is scavenged from the air and absorbed into a water circuit which serves the radiators within the property. The compressed gas from the refrigeration circuit then allows the scavenged heat from the outside air to heat the water medium which is distributed to all heat sources within the building. Such heat pumps work effectively in the same way that a household fridge extracts heat from its inside to cool the food produce down, but in this case the heat pump is extracting heat from outside air to heat the building.

You may ask ‘how does it extract heat from the air when the Isle of Man is rather cold in winter?’…but the Isle of Man is the perfect location for this technology to be efficient all year round as we have relatively mild winters.

The pump can still extract heat from the air at sub-zero temperatures, as it operates at even as low as -20°C. This is because absolute zero, the null point on the Kelvin thermodynamic temperature scale (equivalent of -273.15°C), is the temperature at which all thermal motion ceases in gas. With air being a gas and having very different properties to water, it allows the pump to still extract heat at such low temperatures.

Renewable energy is energy that is collected from naturally replenished (renewable) sources, including sunlight, wind, rain, tides, and waves. The air to water heat pump uses air that is naturally heated by the sun and ground to produce heat. The only electrical consumption is that utilised to run the compressor in the refrigeration circuit.

Although the air to water heat pump itself is powered by electricity, the technology is between 3 to 5 times more efficient than using electricity alone; for every 1kw of electric needed to run, you get 3 to 5kw of heat output into the building.

‘It’s pleasing to see Government Departments utilising next generation technology such as air source heat pumps for their own commercial buildings. As these products become more industry standard, I am sure we will see a reduction in carbon emissions across the Island.’

Renewable technologies such as the heat pump are available for both commercial and residential use. If anyone is interested in the technology and would like to know more about SCS’s services please click here.