A day in the life of... Outlier Distilling Company 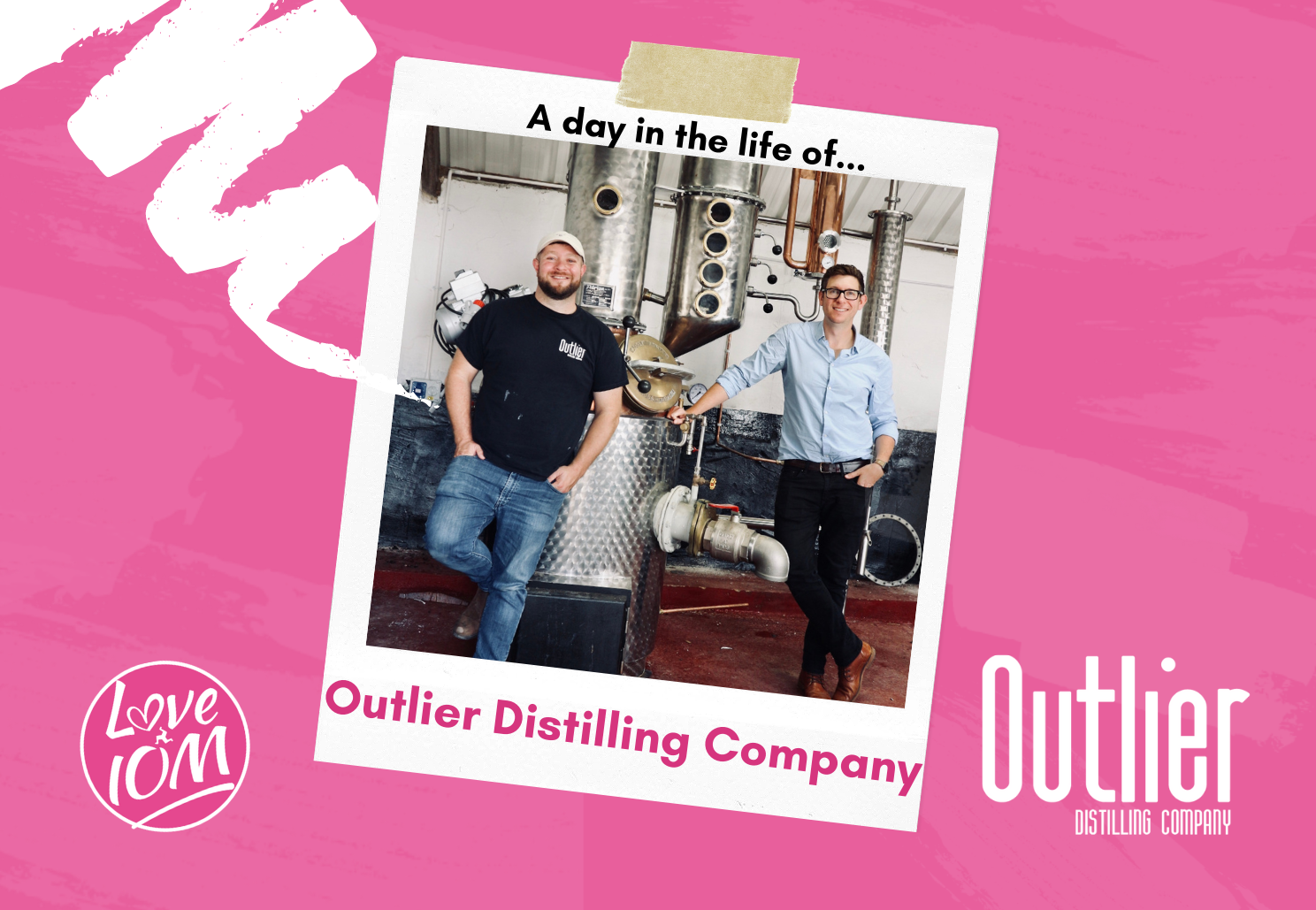 The Outlier Distilling Company (or Outlier for short) is a two-man craft distillery based in Andreas on Ballakelly Farm. The founders are Ian Warborn-Jones and Rick Dacey who focus on production and marketing respectively. The following is a typical ‘running’ day when the Outlier still is fired. 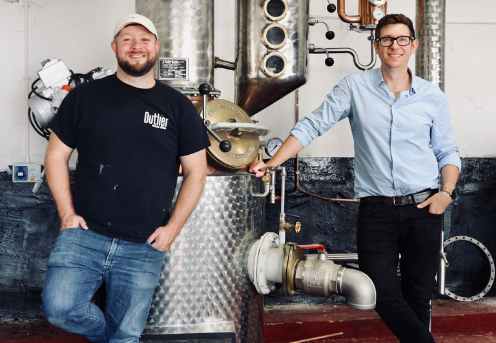 6:00-8:00: The Outlier day starts with Ian getting jabbed in the eye by one of his two children and Rick being mentally broken by his. After a wholesome breakfast of caffeinated drinks and huffing, Ian takes his Outlier-branded pickup truck on a casual 10-minute drive from Regaby to Ballakelly Farm. In the meantime, Rick battles wind and rain on the mountain pass as he commutes from Onchan, sometimes enjoying his caffeinated drinks and huffing in transit.

8:00: One of Team Outlier – usually Ian – starts firing up the 180-litre wood-fuelled still, first getting a starter fire going to warm the flue. This encourages the main fire to draw, pulling smoke up and out the distillery. This is done to the tunes of Metallica (Ian) or the Wolf and Owl podcast (Rick).

8:15: Once the flue is hot to the touch, the main fire is lit. This heats the water in the sleeve above, which in turns boils the wash in the pot (a wash is the low-ish alcohol ferment from which higher proof alcohol is distilled). Once that’s kicking off with kindling, larger pieces of wood are carefully placed in, i.e. ‘slung-in-while-staring-longingly-at-the-kettle’. The wood off-cuts come direct from the DEFA sawmill, which is a fairly sustainable way to work. 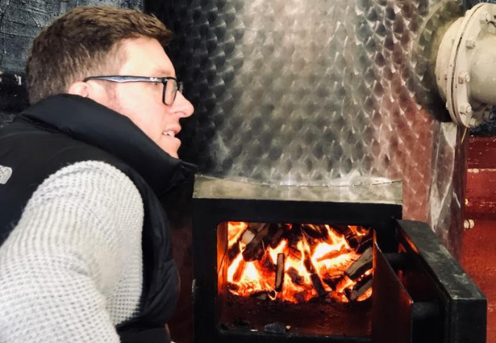 9:00: The other half of Outlier arrive and greetings are exchanged, which typically involve light growling to mask any genuine sense of affection. Coffee is imbibed, basic checks are ticked off, and day planning takes place. In a best-case scenario, this involves an up-to-date Trello board and a couple of spreadsheets. In reality, it involves adopting thousand-yard stares and trying to recollect what needs to be done. Ian requires more coffee and louder music.

9:30: The still needs careful monitoring to be kept at suitably face-melting temperatures. This necessitates frequent middle-class log chopping Rocky montages. Meanwhile, an industrial hose fills the 180 litre still with whatever wash is going into the pot.

10:00: Although the still has a pressure release valve, it can’t be left unattended at any point. Warmth should now be spreading from the pot to the column and across the rest of the kit. Eventually a strong smell of bananas appears, which foreshadows the arrival of the methanol (the very much poisonous methanol that you don’t want anywhere near your finished product – methanol has a lower boiling point than ethanol so runs out first). Once the methanol is ‘cut’, the high proof spirit is collected in a shiny metal bucket. While this is going on, Rick starts to articulate a half-thought-through marketing idea and pauses halfway through.

10:30: The kettle goes back on. If, somewhat miraculously, there are any biscuits left then a number of these will be dunked. Around this time, Farmer Alan from Ballakelly might turn up and call the pair workshy. It’s a fair accusation: farmers are the hardest of hard grafters.

10:45: The first run, which always takes the longest, is complete. The distilled spirit is measured, both in terms of volume and ABV (alcohol by volume), before being collected in a large steel pot or in a wooden barrel. Everything is logged on Google Docs safely in the cloud. This sometimes necessitates someone stumbling around the distillery courtyard with phone held aloft trying to get a signal while muttering about the launch of Elon Musk’s Starlink service.

11:00: A second run is started with the still now at full speed. Hoses are cleaned, floors are scrubbed. Rick retreats to his laptop for admin, while Ian cranks up some 90’s era metal, modern-era sea shanties, or a Lovecraftian podcast.

11:30: Once a week, Ian checks the spirits in the barrel room to see how they’re maturing. Spirits typically sit in wooden casks at a significantly higher percentage than at which they’ll be bottled. For instance, there’s Outlier rum currently aging at over 60% ABV.

11:45: Rick reappears and resumes his half-thought-through marketing idea (see 10:00). Ian usually has no idea what the he’s talking about. An agreement is reached: lunch. This entails a short trip to Andreas Stores to collect some rolls.

12:00: A lengthy conversation takes place on the veritable merits of corn beef and mustard rolls, followed by the inevitable lament that there haven’t been any for some weeks.

13:00: The second run is finished and logged before mild panic regarding potential school run commitments kick in. If things are a little tight then the decision to wind the still down might be taken - admin and planning then takes place in Ian’s garden over a game of Kubb. If not, a third run is begun, possibly accompanied by a call with a supplier in the UK, a local artist to commission a new label image, or with Outlier’s in-house designer, Elin, who helps put Outlier high concept ideas into practice. 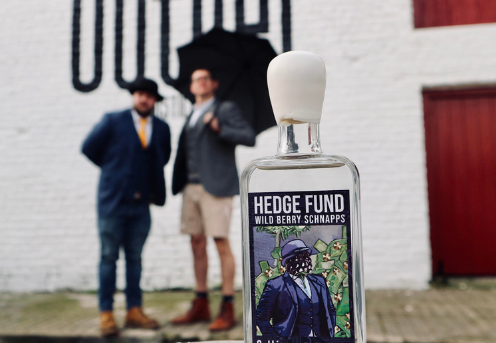 15:15: In reality A, kids are being picked up from school with the still room hosed down and copper coils from the catalyser bathing in citric acid. In reality B, the third run is being finished off and things start winding up for the day. While the main part of the running day may be over, there’s always a flurry of WhatsApp messages throughout the rest of the day and into the evening.