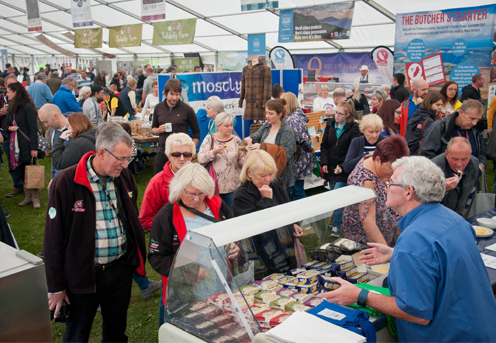 Recent findings estimate that the annual Isle of Man Food & Drink Festival is now worth £298,000 to the local economy.

According to an Exhibitor and Visitor Research Report compiled by The Marketing Partnership, the Festival’s worth to the local economy has risen from £230,000 in 2017 to £298,000 in 2018. The economic value of the event appears to be increasing consistently and significantly year on year.

The 2018 Festival was the tenth anniversary and the largest yet, attracting more than 10,000 visitors.

The Festival plays an important role in raising the profile of exhibitors, with 94% of visitors agreeing that they were more likely to visit the Isle of Man Food & Drink Festival again following attendance this year.

For the second year, producers were encouraged to display the Isle of Man Provenance label, introduced in 2017 to indicate produce that is grown, reared, caught and/or processed in the Isle of Man and/or contains mostly Manx ingredients. Its creation forms part of the Food Matters strategy to grow the value of Isle of Man food and drink; a sector that is now worth over £100 million to the economy.

Close to 90% of visitors stated that they felt that it was important for the Island’s food products to display the Isle of Man Provenance label, with 99% agreeing that the quality of local produce is good and 92% stating that they felt it was good value for money.

‘The Festival’s growing popularity reflects the growth in Isle of Man food and drink, being driven by the Department’s Food Matters strategy, and the growing desire among people to support local food and drink producers and businesses.

’These statistics are impressive and it is highly encouraging to witness first-hand the impact that this event is having on our local economy. We have high hopes that this will continue in 2019 and beyond.’

The Isle of Man Food & Drink Festival is a showcase of the finest Manx produce and is among the biggest held in the Island. In 2015 it won the PokerStars Award for Public Sector Achievement of the Year at Isle of Man Newspapers’ Awards for Excellence.

Next year’s Festival, run by the Department of Environment, Food and Agriculture (DEFA), takes place at the Villa Marina Gardens on Saturday 14th and Sunday 15th September 2019, and will continue to showcase the Island’s wide variety of local food and drink producers and manufacturers.