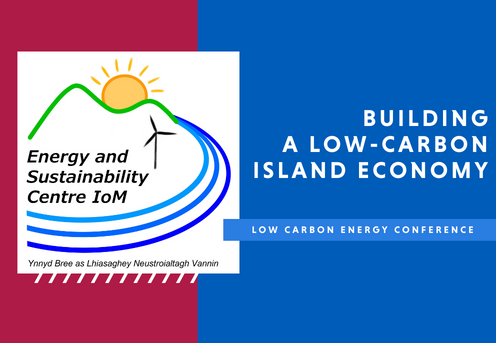 The Energy & Sustainability Centre Isle of Man (ESC) hosted an international conference focusing on renewable energy with experts from the UK, Denmark and Faroe Islands.

The ‘Building A Low-Carbon Island Economy’ conference at The Comis Hotel on October 27th explored renewable energy technology, funding and investment issues, plus a broader discussion about sustainability.

ESC is an independent, not-for-profit, Isle of Man charity – sponsored by KPMG, The Peel Group, and Zurich on the Isle of Man – and is a UNESCO Biosphere Isle of Man Partner. It is led by earth scientist and Chair of the Manx Geological Survey, Dr Dave Quirk; former MHK Ralph Peake; and environmental specialist John Boucher who has a Master’s degree in sustainable energy.

Representatives from across the Island’s public and private sectors attended the conference to hear from internationally respected experts who have developed strategies to achieve 100% renewable energy as early as 2030. Proceedings were opened by ESC Director and former MHK Ralph Peake. He introduced Deputy Chief Minister Jane Poole-Wilson MHK who spoke about the Island’s net-zero plans, and the economic, energy security and environmental benefits that could be gained from a transition to a low-carbon economy.

The agenda then moved on to presentations and Q&A sessions featuring a number of guest speakers and audience members including ESC’s Directors; Professor Henrik Lund, a world leading scientist who is Professor in Energy Planning at Aalborg University in Denmark and Editor‐in‐Chief of Elsevier’s international journal ENERGY; Professor Poul Alberg Østergaard from Aalborg University; Terji Nielsen, Head of the R&D Department at Faroe Islands power company SEV; Helma Maria Tróndheim, a researcher in SEV’s R&D department; and Simon Nicolas from KPMG where he is a Senior Partner and Head of Client and Markets across KPMG Crown Dependencies and Regional Head of ESG across KPMG Islands Group. Daphne Caine MHK (Chair of the Climate Change Transformation Board) was also among the notable guests. The conference was held just a few days after Tynwald passed the Climate Change Bill. Professor James Curran, who has played a significant role in shaping Government policy and will lead delivery of the Island’s Climate Change Action Plan, was also a guest speaker at the conference, so his presentation was very topical.

ESC is building models and creating options to help move the Isle of Man from its current dependence on fossil fuels to future self-sufficiency in low-carbon power. That work involves building computer generated simulations of wind and solar schemes, energy storage and electricity transmission. The conference featured videos sponsored by Zurich on the Isle of Man which illustrate ESC’s vision of what a low-carbon future could look like here on the Island.

To build on the momentum generated by the conference ESC is planning several educational events in November. Full details will be posted on www.greenfutureisland.im soon. 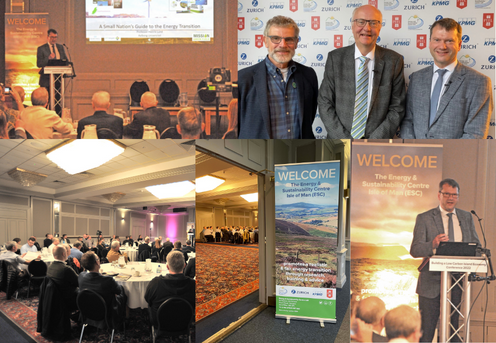 The Low-Carbon Future conference organised by ESC was held at The Comis Hotel.