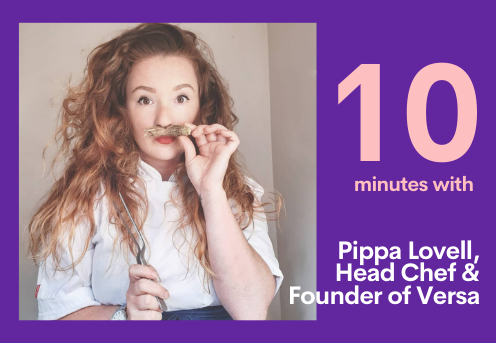 The world celebrates womanhood each year on March 8th as International Women's Day. On this day, we come together to honour the achievements of women. The day also marks a call to action for accelerating gender parity.

The campaign theme for International Women's Day 2021 is 'Choose To Challenge'. A challenging world is an alert world. And from challenge comes change. So let's all #ChooseToChallenge.

To celebrate progression in hospitality careers for women, we caught up with Pippa Lovell, Head Chef and Founder of Versa.

Versa is a restaurant concept based on the Isle of Man focused on sustainability. The menus change weekly to truly reflect the season, and if it's not Manx, it won't be coming through our door. If the ingredients we use are not foraged, they have been sourced from a very local supplier.

Q: Hi Pippa, thank you for taking the time to talk with us. In celebration of women, let's start things of by asking you to name three women who inspire you?

A: There are a ridiculous amount of women who inspire me, and not just because they are women but because of what they do.

Starting with Dominique Crenn- she’s a wonderful female chef. Along with winning lots of michelin stars, she is an activist, a fighter and just a real strong woman. She’s going through cancer and experiencing lots of other struggles yet she is so true to her values and she continues to fight for them, and I think that if something really means something to you and it’s embedded in your life and being that even through the struggles, you’ll stand up for that. For me, she’s someone that really represents that and I have a lot of admiration for her fight and her continuation of her belief.

Alice Waters- she really chose to challenge. She challenged, food, systems, belief systems around food, the right to food, health, nutrition and most important to me-locality. She really re-defined locality and I guess I’m using that as a base and I’m trying to go a little further and further in her name.

Cliché, I’m going to have to say my mum who I lost a few years ago but every day she is having an impact on what I do. She taught me how to be versatile. I was never really good at one thing but could just do a bit of everything- that has really helped me in my life and now it translates into ‘Versa’. Not just ‘vice versa’ and the relationship with the land but also short for ‘versatile’ so the concept of taking what you have and making the most of it. Also working in your means and relishing in what you have, rather than always wanting more.

What does 'choose to challenge' mean to you?

'Choosing to challenge' to me is choosing not to accept things how they are, the fact that nothing is set in stone, nothing is the be-all or end-all of a situation, a concept or an idea. Choosing to challenge means that I have a choice, that my views and ethics are valid, and that I can have my own opinions and they aren’t invalidated by the ways things are and how society constructs things. In particular, I like to choose to challenge food sources and food systems. So, at Versa a lot of my focus is on foraging and the whole point of that is to show how bio-diverse entities and forests, beaches etc are equally good food sources. Maybe by shifting our focus to that and choosing to challenge the norm, things like our health and economy can be developed through making that change.

In addition, having a choice for me is really empowering. Being able to choose to challenge something and having options to challenge something in my day to day and everything I do, is really empowering. Challenging things for me is a real drive in everything that I do because I think it takes people to question things how they are in order to make change. So for me, choosing to challenge is a lot about being a catalyst and not necessarily deciding what’s right or wrong and thinking you know everything, but opening those pathways.

What advice would you give to your younger self?

Do you think enough is being done by your sector to address gender imbalance?

I think there’s enough being done about gender imbalance in this sector because there are women doing it- and I think that is enough. I think that sheer testimonies of women succeeding in the industry is enough. I don’t think we necessarily always need to do something about it, I think that just leading by example can sometimes be enough. So I think by women becoming successful in the industry is speaking for itself- we have the likes of Claire Corbin who has each just won three Michelin Stars. Women are really coming up in the industry and showing that it’s not about gender but as long as you have the passion and drive that anyone can do it.

How has the Isle of Man helped you with your career?

The Isle of Man Government has really helped my restaurant and concept to get off the ground by working with me on lots of marketing opportunities. Lots of TV production companies and journalists from all around the world have then since contacted me off the back of things that different governmental departments have set up which I’m extremely grateful for, especially as my whole notion is to get the Isle of Man noticed.

Another thing that the Island has really helped me to achieve what I want to achieve is just simply the day to day inspiration- look around where we live! The Island has stunning glens, beaches and forests. When my whole ethos is about nature and the land, and having a relationship with it, I don’t know where else I would rather live and be inspired by on a day-to-day basis. The sheer fact that it’s a biosphere nation to begin with is so inspirational but on top of that the Isle of Man has helped me in the sense that it’s got a really collaborative mindset. I feel that most people aren’t really working against each other here- instead everyone is working together and uplifting each others businesses, concepts and ideas. The Isle of Man has given me such a voice and platform, and for such a small Island I’m really starting to have a global impact and I just could not do it without the support of the Isle of Man Government and community- everyone has played a part in it and I couldn’t be more proud.